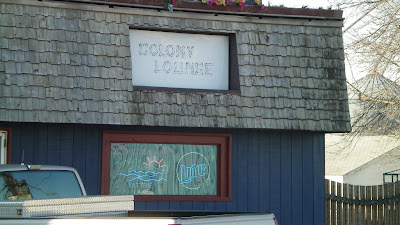 When one travels into the northern regions of Iowa, or further into Minnesota, the pork tenderloins are more likely to be battered instead of breaded. The attraction of Clear Lake means many people visit this area in the summer, and there are plentiful dining options near, or on, the lake. Ventura probably sees its population swell during the summer as people visit the lake. When driving into Ventura, the sign for this place near the entrance to town reads Colony Inn Restaurant and Lounge.

Directions: You take the Clear Lake Highway 18 exit West from I-80. Turn south at the sign for Ventura and find the old main street behind the grain elevators. 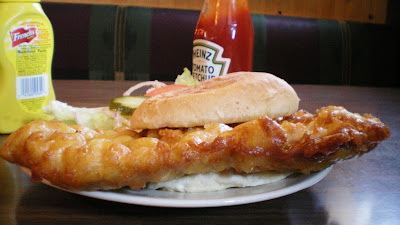 The Tenderloin: First things first, this one was huge, and it looked really good with the fixins on the side of the giant plate. It felt like at least twelve ounces before battering and frying. The big letdown was the lack of any seasoning in the batter. The meat was beaten a little too much, leading to a limp flopping sandwich. It has tons of natural pork taste in the bright white meat locked in by the battering and frying process, but not any other flavor on top of it. Overall 7.5 out of ten. 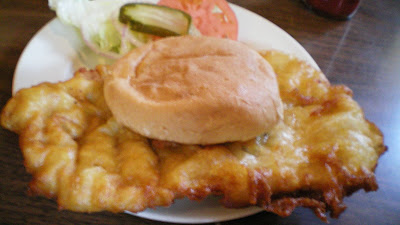 Also on the menu: A big menu with steaks, salads and burgers.

Service: Its table service, I visited when it wasn't busy. 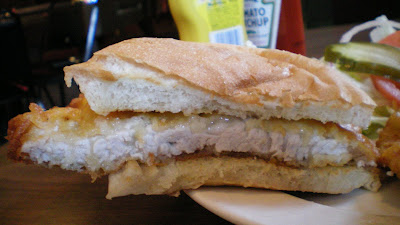 Ambiance: This place has a hunting lodge style dining area with wood paneling and pictures of game animals. There are booths and a bar to eat at. There is a lounge area in the next room, somewhere is a banquet hall in this large building.

The menu here tells me this tenderloin once nearly won a best tenderloin in the state award. But their new website doesn't have it listed on the menu. Maybe its because the sandwich page hasn't been uploaded yet, but I don't know. The people who operate this restaurant also run the kitchen at the seasonally-opened PM Park on the opposite side of Clear Lake. Next on my list in Ventura is the Muskie Lounge with lakeside boat service. The Suzie-Q Cafe in nearby Mason City serves a battered loin with a lot more flavor mixed in. Further west in Algona I found a good breaded tenderloin. Either way, this area has plenty of good tenderloins. 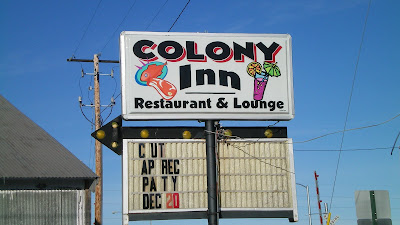