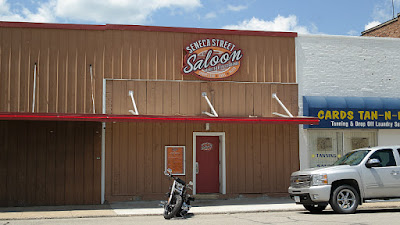 Seneca Street Saloon and Pizza is a block off the main commercial street in Webster City and their menu is posted in front of the door. It lists a hand breaded tenderloin for $4.25 so I had to stop in and check it out for myself. A local newspaper claims this is the first sports bar in Webster City, and they sell a lot of pizza here.

Directions: The main turnoff for Webster City from Highway 20 takes you up Superior St and if you turn after the park you will be a block away from Seneca St Saloon. 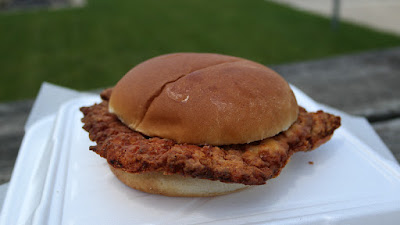 The Tenderloin:The breading had some crackermeal that seemed to get a little toasty during its time in the fryer. Part of the meat was juicy, part was on the dry side. This was about average for a bar food tenderloin in small town Iowa. Served on a warm bun with your choice of fixins. Overall 7.0 out of ten.

Also on the menu: they have bar food appetizers and sandwiches and the specialty is homemade pizza. 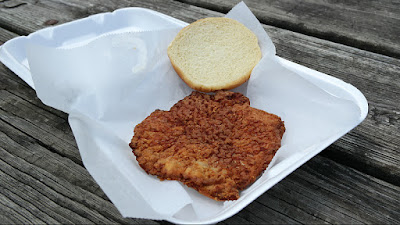 Service: I just got takeout from the bar, but they will deliver in Webster City.

Ambiance: There was a lot of wood paneling and an old bar. Beer signs and sports stuff covers the walls.

Final Thoughts: I have been through Webster City plenty of times and never found a good tenderloin. Its a good drive from here to find a better one than at Seneca Street Saloon. 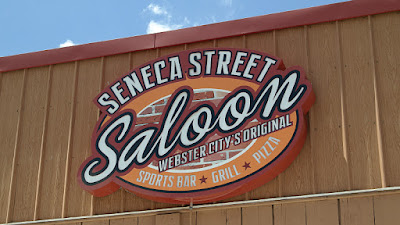 Posted by Tyrgyzistan at 2:45 AM No comments: 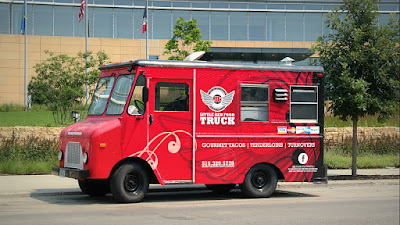 I was able to try a breaded pork tenderloin sandwich at The Spot Food Truck last year, and one from Chuckie's Iowa Tenderloin Truck at the Iowa State Fair the year before, and even earlier at the mobile unit of the Townhouse Supper Club when it came to Des Moines several years ago. The latest food truck to sell breaded pork tenderloins is the Little Red Food Truck parked downtown for this summer.

Location: They have only been around for a couple months and may move around, check their social media page to know where they will be.

Directions: You can drive downtown on Mondays, Wednesdays and Fridays and they will probably be in the sculpture park area where the other trucks are parked. 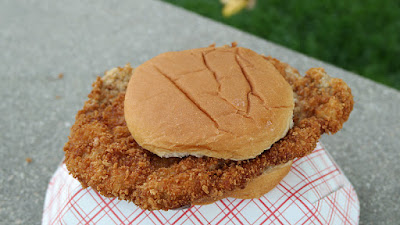 The Tenderloin: This was described as pork ribeye loin meat, and the bright white meat was very juicy. Panko bread crumbs gave this sandwich a classic crunchy texture. The first problem was that the loin meat was not entirely coated in the breadcrumbs, parts were just bare meat. Another was the trim job that left hunks of fat in the loin meat that were a little too big. The panko had a little salt in the taste, so something could have been added. Served with your choice of fixins on a soft bun. Overall 7.30 out of ten. 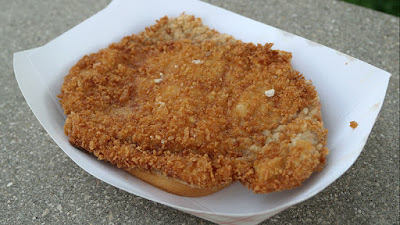 Service: Just a walk up food truck service. There were two people inside when I stopped by. 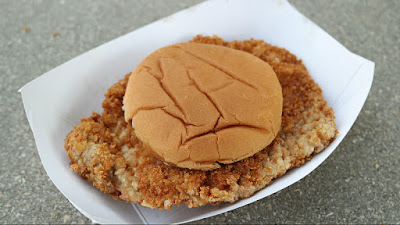 Ambiance: I found the truck when it was parked on a sidewalk across from the sculpture park.

Final Thoughts: This isn't the first food truck to try selling tenderloins in Des Moines, and there is another truck with tenderloins on the menu parked across the street. Fixings some problems with the sandwich could make this one competitive with the other tenderloins in town. 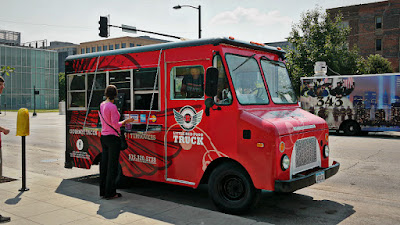 Posted by Tyrgyzistan at 3:56 AM No comments: