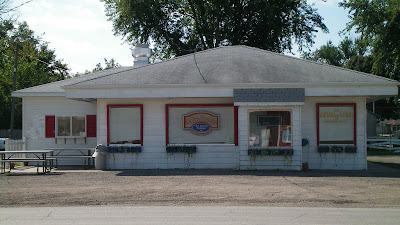 In the few short years since this space was turned into Goldie's Ice Cream Shoppe, it has been featured in a Des Moines Register article about small town ice cream stands, then KCCI TV had their Cruising For Comfort Food feature visit here. Last October, the Iowa Pork Producers Association gave Goldies its coveted and prestigious Best Tenderloin in Award. The owner, Brad Magg, created his own catering company when he was still in High School. Since then he has taken over the ice cream shop, been elected to the City Council of nearby Colfax, and promoted a Demolition Derby all before turning 24 years old. His next step could be world domination, or perhaps an even bigger demolition derby.

Directions: You take East University from Des Moines, it turns into Highway 163 and Goldies is just past Casey's from the Prairie City exit.


The Tenderloin: This has to be at least eight ounces after cooking. The lightly seasoned breading forms some gigantic crumbs on the edges. The meat is very tender with a consistent texture. According to the IPPA press release, the pork loin is cut and tenderized at the meat department at Fareway in Pleasant Hill. Served with all the fixings on a large untoasted bun. Overall 8.63 out of ten.
The Mingo Special: this is made with seasoned Italian Sausage from the Mingo Locker, and a slice of provolone cheese on top. I had trouble trying to eat one of these while driving, the sausage was all over the place.

The Magg Combo: This is a tenderloin topped with a cheeseburger. The ground beef is from the nearby family farm run by the Magg family, processed at the Mingo Locker. This one works better as a sandwich than the other combo deal. Each one gets a good melt job on top of the beef. 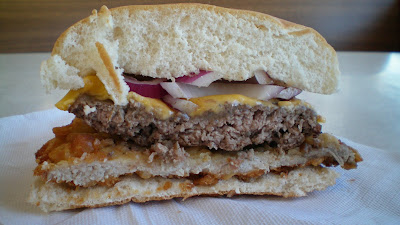 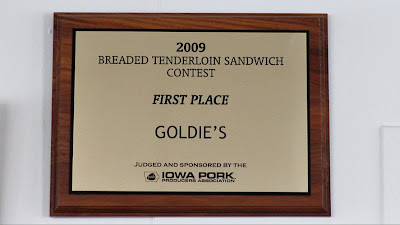 Also on the menu: There are daily specials to go with the usual burgers and salads, a full ice cream selection. The feature dessert item seems to be the Suicide Twister. The drive-thru window sells coffee in the morning. The menu used to have a note reading "we sell farm raised steaks!"

The PC Dog: This is a cheese stuffed hot dog wrapped in bacon:

The Chili Cheese Fries: these came in a little bowl. For a small extra price you can get lightly battered "Goldies Fries". 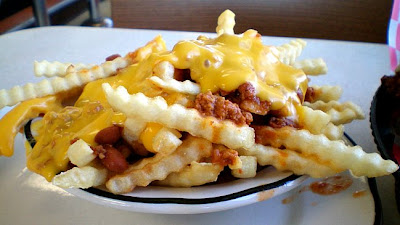 The Fried Cauliflower: I never forget the vegetables. 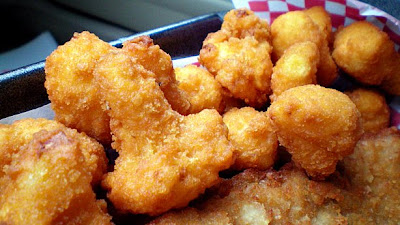 The Tenderloin Strips: This was described on the menu as a tenderloin without a bun, cut into strips. I guess this is for people allergic to buns, or on low carb diet plans:


Service: Its table service with mostly old ladies waiting tables. There is a walk-up window and drive-thru for ice cream orders. In the mornings this place serves coffee, PC PERK, from the drive-thru window.


Ambiance: Its not much from the outside, but the interior is brighter with the classic ice cream shop look, and specials written on a chalkboard. There are a few booths and tables, plus a counter for seating. When the weather is good you can sit at picnic tables outside. Since the IPPA award last fall, its been tough to get a place to sit. 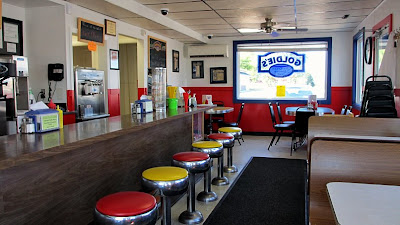 Final Thoughts: I put this place on my own list of the best tenderloins near Des Moines after trying the two sandwiches that were tenderloins with toppings. I've seen the owner a few times running around the kitchen, and understand he is an advocate of small towns in Iowa. As a general rule, I think you get a better sandwich experience in the small town cafes and places like this then at any big or expensive restaurant in Des Moines. I recommend picking up the Magg Combo to anyone on the road to Pella. 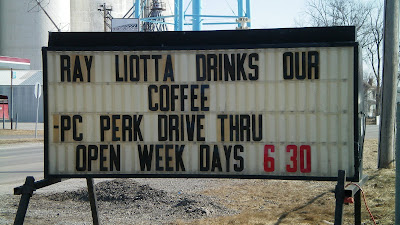 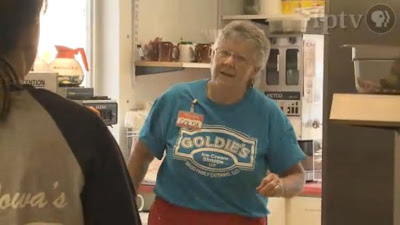 Goldies was featured on the second season of IPTV's Iowa's Simple Pleasures, the above screengrab is the former owner and founder, Golda.
Check out the video here.
Or visit the show page:
http://www.iptv.org/simplepleasures/default.cfm

Posted by Tyrgyzistan at 3:26 AM