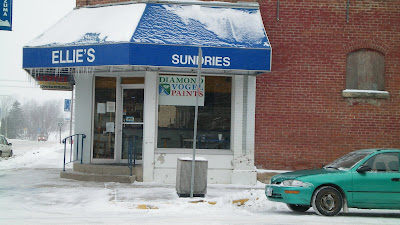 Driving through the town square on the state highway on a snowy day, this tiny place caught the corner of my eye. The sign on the side reads "homemade tenderloins", that was enough to pull me off the road and into this establishment.


Location: 211 E. 2nd St. Montezuma, on the northwest corner of the square.
Montezuma Iowa (population 1,440 in the 2000 Census) is the seat of Poweshiek County on the eastern edge of Central Iowa.


Directions: Montezuma is in the south central part of Poweshiek County, take the highway 63 turnoff from the interstate about 6 miles south to Main St./HWY 85 a few blocks into town. 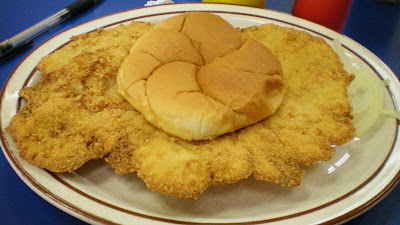 The Tenderloin: This is close to thes epitome of the super-thin tenderloin sandwich. It has clearly been pounded into submission before breading and frying. The fat has mostly been trimmed but has a few small chewy parts in the thick areas on one side. The meat to breading ratio is skewed by the large surfare area. It is nicely browned with plenty of crunchyness and crumbs falling everywhere. I have to admit that the cracker-thin tenderloins just don't do it for me. There just isn't enough tender pork to bite into when its pounded this thin. This is served on a toasted bun with the fixings on the side. Overall 6.5/10 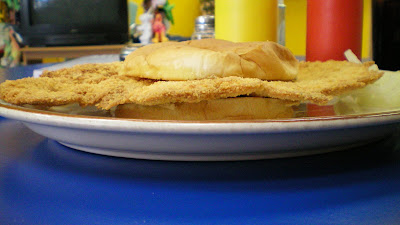 Also on the Menu: Soda Fountain malts and ice-cream, along with deli-style sandwiches and loose-meat burgers.
Service: I think the owner of the store took my order and went in back to start the tenderloin. Another employee showed up later. Each seemed to know their customers by name. 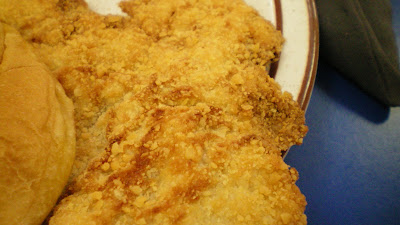 Ambiance: The front of the store is a food counter, the back is split between a kitchen and stock of paint supplies materials. The walls are covered in paint brushes and graphic t-sirts in the dining area.
Final Thoughts: I was lucky to find this place when I was driving in the middle of a snowstorm in January. Many ice-cream and soda fountain places close for the winter and re-open about when school is let out. If you like wide and thin tenderloins, this one is for you. 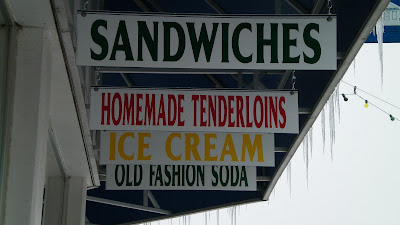