The Other Place in Clear Lake, Iowa 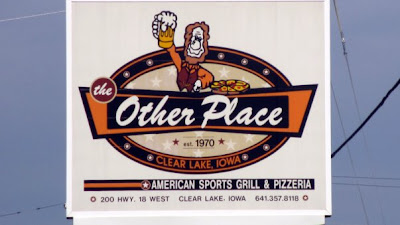 The Other Place is one of the most successful restaurant chains ever conceived in Iowa. The initial locations in the Cedar Falls and Waterloo opened in the seventies, then Mason City and Clear Lake in the eighties. Finally expanding to Kansas City and later Central Iowa in the past decade. The locations have stayed in business for decades, and the older ones look more like old pizza parlors from the outside. The Other Place in Clear Lake also suffered a grease fire in its kitchen in January but reopened just three weeks later.

Directions: Its just a mile off I-35 taking the Highway 18 exit through Clear Lake. Its hard to miss the gigantic building.

Online at: website for the chain  with locations and menus is HERE. 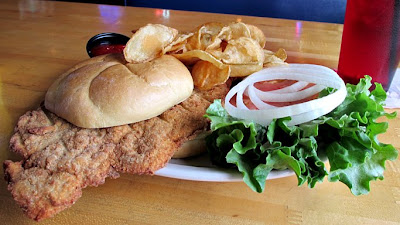 The Tenderloin: Taking the bun off the top reveals some marks that look like this was in storage for a while. The breading was more of a fine layer than anything crunchy, once again little seasoning save some visible black pepper flakes. The meat had been tenderized thoroughly and pounded into a large triangle shape. This is one of the better chain restaurant tenderloins out there, and clearly hand breaded. Served on a gigantic bun with more than enough vegetables on the side. Overall 7.5 out of ten. 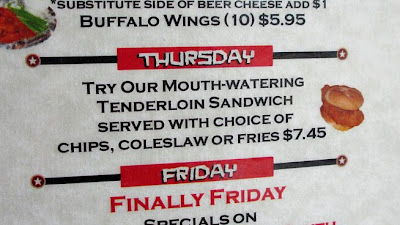 Also on the menu: Like most chain sports bars the menu is huge with lots of stuff they might not be particularly good at making. There are soups and baked sandwiches, wings, fried appetizers, pastas, and their pizza is overloaded with cheese and toppings. The Mexican section even includes the "Biggest Burrito in Town", is that a realistic claim in Storm Lake, Iowa? 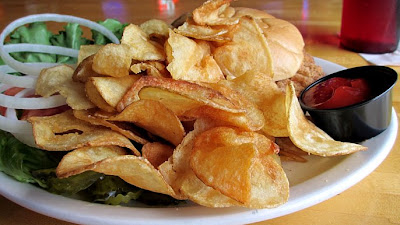 The sides available include homemade chips that were good salty crunchy things that paired well with ketchup:

Service: I was in during the off hours in the middle of the day, no wait for a table and nothing to complain about. 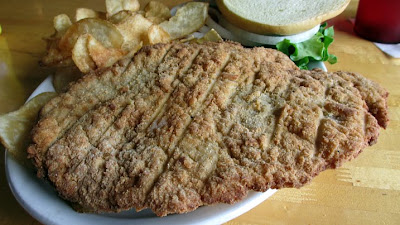 Ambiance: This is a very modern and new sports bar with a gigantic dining area and at least twenty televisions tuned into sports. There is a bar area, takeout counter, and outside patio space for special events and barbecues. The whole place is just huge. 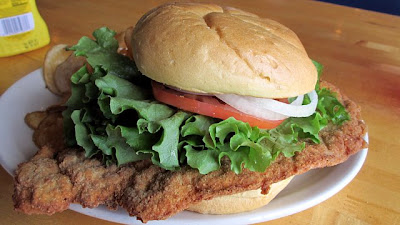 Final Thoughts: The Clear Lake and Mason City area has a lot of choices for dining. While The Other Place isn't the best its still a good choice for groups or families who need a large menu and tons of televisions. Just across the street is the honorary Buddy Holly Place and the lake isn't far away. 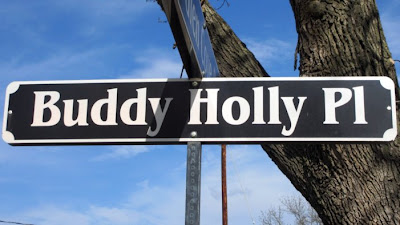 Posted by Tyrgyzistan at 3:39 AM