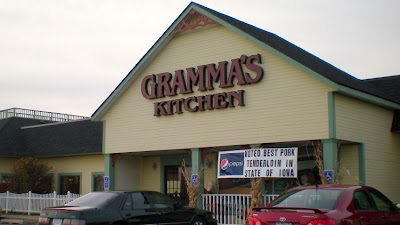 I have found my fair share of battered tenderloins while driving through Iowa. The slight difference in texture and crispiness sets them apart from the breaded tenderloin sandwiches. The pictures come out a little different because of the smoother surface on the batter coated pork loin. Gramma's Kitchen in Walcott was voted your 2011 IPPA Best Tenderloin in the State of Iowa, and it is described as "famous" on their menu.

Directions: This is on the north side of the Interstate at exit 284, Across from the giant truck stop with a giant sign you can't miss. 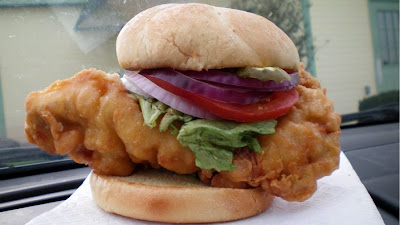 The Tenderloin: Getting this in a to-go box, it opens up like a package of fish-n-chips with a giant battered strip of pork stretching across the container. The meat felt like a seven ounce triangle of pork that took a great shape after being battered and fried.You can see in the picture that the loin formed something of a curled up shape that held the fixins and the bun in place on top. The batter was crunchy on the edges, but the middle and inside could be described as "fluffy", something rarely seen in pork tenderloins. Served with all your fixins to stack under a toasted flour-dusted bun. Overall 8.7 out of ten. 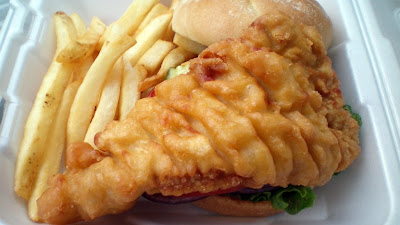 Also on the menu: The menu has the comfort food classics like Iowa Chop, Cured Ham, Meatloaf, and pies along with some of the usual stuff you see everywhere. The Checkered Flag menu has sports bar items and a Pork Chimichanga.


Service: The restaurants owned by the Heart of America Group are a lot of things, but they are all fast, efficient, clean, can handle groups and you never need a reservation. I think they serve any item from the Checkered Flag or Gramma's Kitchen in both dining areas. 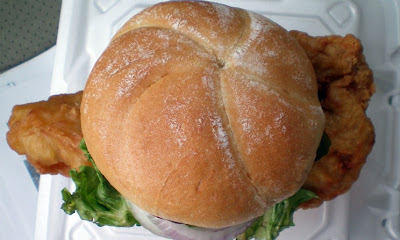 Ambiance: I didn't have time to dine in, but there is a gift shop area in front of reception with Iowa and  farm-themed stuff for sale. The dining are is made out to look like some imaginary Gramma out there somewhere. There is another entrance to the building with an entirely separate restaurant, the racing themed sports bar-like Checkered Flag.


Final Thoughts: Gramma's Kitchen may have the most convenient location of any tenderloin in Iowa. Smitty's in Des Moines is close to the airport, but more people drive through Iowa on I-80 than any other way through Iowa. The truck stop across the street is very busy year round. Gramma's Kitchen is not a small-town mom-and-pop place, but their professional culinary team had put together a competitive loin. 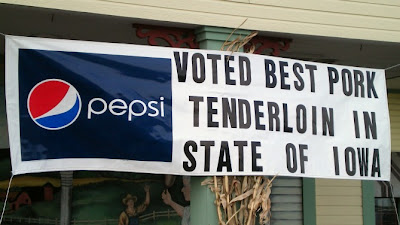 Posted by Tyrgyzistan at 4:12 AM