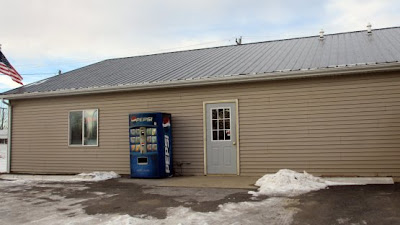 Every year I like to save money on my European vacation by visiting places like Moscow, Rome, New London and two places in Iowa named Paris. Deano's was a small town hole-in-the-wall cafe in nearby Lockridge before moving along Highway 34 to the small town of Rome. Its as if all roads lead to Deano's in this tiny town.

Directions: Take Highway 34 about seven miles West of Mt Pleasant, and turn north onto a road that turns into 4th St. in Rome, Deano's is a block over to the East. 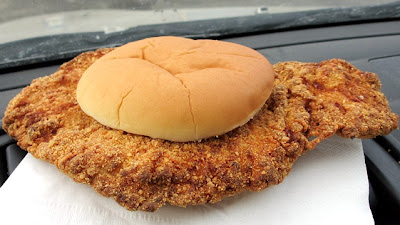 The Tenderloin: This sandwich was a big enough to fill a to-go bag, and heavy with a thick triangle shaped pork loin inside the soft bun. The breading was a great crunch with just a little seasoning. Parts of the thinner edges of the meat turned a little tough in the cooking process and were a little dry. Most of the sandwich was pull-apart tender. Served with all the fixings, overall 7.4 out of ten. 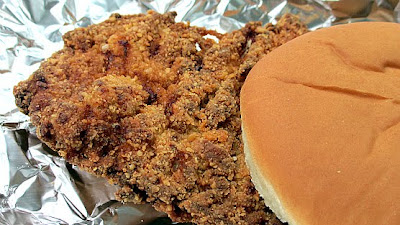 Also on the menu: The menu has a drawing of a cow on the front but I forgot to take notes on what else they serve. If I had seen something unusual I probably would have remembered.


Service: I was in during the off hours and went to the counter, then had my order in just a few minutes. 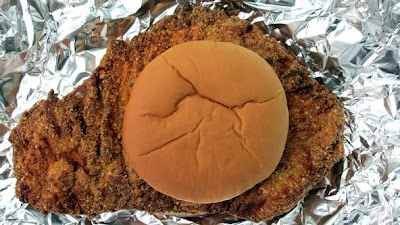 Ambiance: Outside looks as plain as any place I've been to anywhere. This is a large restaurant area with tables and booths and two bulletin boards with all the town news and businesses in one place.


Final Thoughts: I came, I saw, I ate a gigantic tenderloin at a rock bottom price at Deano's Place in Rome. There is only one other place to eat in Rome, so when in Rome, do as the Romans do and eat at Deano's Place. 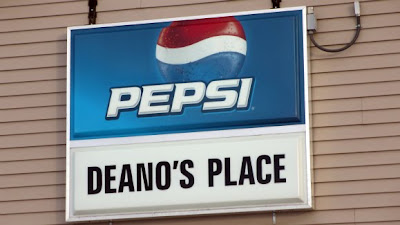 Posted by Tyrgyzistan at 2:09 AM 2 comments: 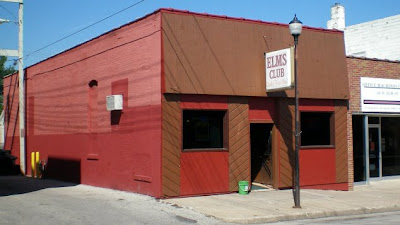 Downtown Creston is a typical regional Iowa town with a big train station and tall buildings like the newly renovated Hotel Iowana. The exterior of The Elms Club gives no hint that any kind of special sandwich lies inside. Walking inside and looking at the menu reminds the visitor that this was a 3rd place winner in a 2003 IPPA Breaded Tenderloin contest. I had been meaning to make it here earlier. A few years ago I came to this place on a Friday night only to find it was a bike night and the kitchen was closed with a bbq smoker selling pulled pork sandwiches outside.


Directions: The Elms Club is on Elm St in the old downtown area of Creston, north of the railroad tracks and Amtrack Station. Follow the signs from the highway to find the business district. 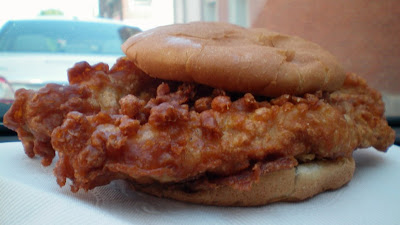 The Tenderloin: The thick and slightly seasoned batter made several crunchy knots on several edges of the tenderloin. Delicious looking golden brown outside lead to bright white pork inside. The whole sandwich felt heavy, but not too big for small appetites. The juiciness and thick white meat was tasty and just tender enough. This is a good one. Overall 9.0 out of ten. 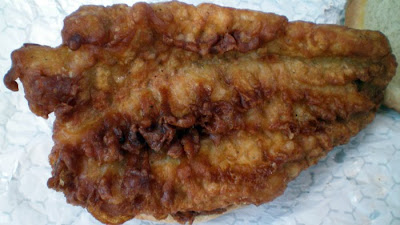 Also on the menu: the usual bar food and fried stuff with burgers and chicken fried steak.

Service: Its bar service and the place gets busy for Karaoke and other events.

Ambiance: This is a darkly lit bar with tables, booths, and a counter for seating. The light comes from beer signs and flatscreen televisions. Taking pictures inside the bar were impossible, and most of my photos didn't get the color quite right. 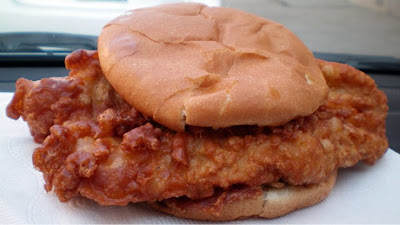 Final Thoughts: The Elms Club in Creston is a low key small town bar with a very good battered tenderloin. Its as the sign reads: Drinks, Food, Pool. 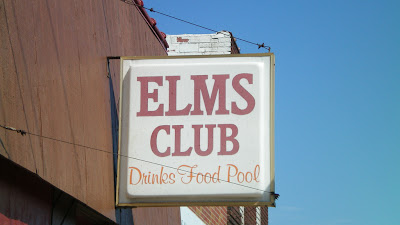 Posted by Tyrgyzistan at 4:43 AM 3 comments: