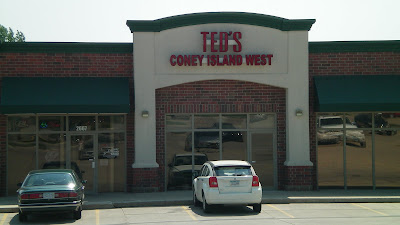 Ted's Coney Island has been serving Greek American fast food in Des Moines for decades, first downtown and later on Ingersoll Avenue. The Ingersoll location has advertised tenderloins on their sign but has served the pre-formed frozen ones for as long as I can remember. Their location in Urbandale has been around for just a couple years. Recently, a chalkboard reading NOW SERVING HOMEMADE TENDERLOINS appeared beside the menu board.

Location: 2667 86th St in Urbandale, in the Des Moines Suburbs. I thought this was in Clive, then I looked at a map and found out its in Urbandale.

Directions: This is in the Westmark Plaza II strip mall with Hobby Haven and its toy race car dirt track on the corner. 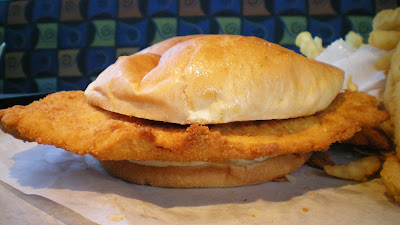 The Tenderloin: You get a real good size pork loin for your money, it feels like about eight ounces. The meat is only slightly tenderized, the grain is still visible. The breading forms a thick layer. The whole thing has good thickness, only thin on the edges. Fried to a golden brown with ketchup, mustard, onions, and pickles. Overall a good 7.0 out of ten. 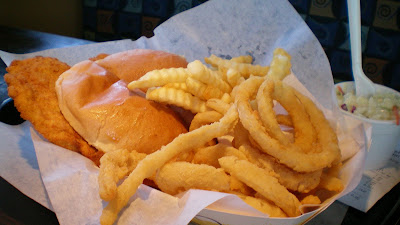 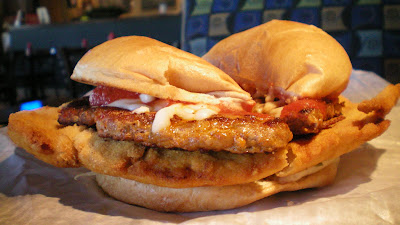 Papa Joe's Pizza Loin: This sandwich includes a Italian Sausage patty with marinara sauce, mozzarella cheese, and Italian Peppers on top of a tenderloin. The Italian Sausage is served at more places in Des Moines than the pork tenderloin, so it is only natural to combine the two. Its priced to sell at $5.95. 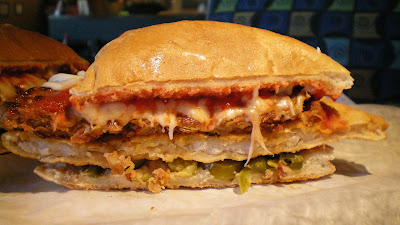 Ambiance: Both locations have an upscale fast food setting with high ceilings and good lighting. This place is not a dive.

Final thoughts: Its always good to see a restaurant replace a frozen tenderloin with a homemade one. The Pizza Loin is a good addition to the topped tenderloin selection, because it uses the next most popular sandwich in Des Moines. I would like to see the Ingersoll Avenue location serve these homemade sandwiches as well. 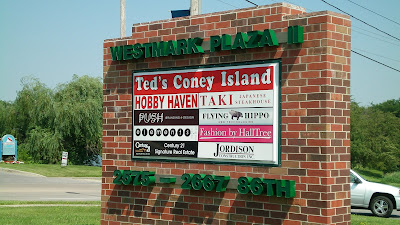 Posted by Tyrgyzistan at 3:47 AM