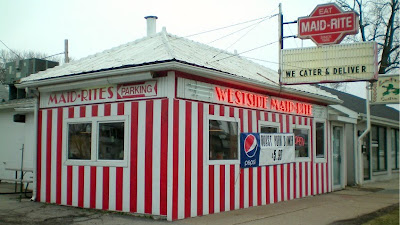 Special Note: This review is for Westside Maid Rite in Cedar Rapids, not for any other Maid Rite anywhere else. They are not all the same.

Maid rite is a chain, but it has a unique franchise structure. There are new Maid Rites in distant cities or new development areas with rigorous product homogenization. Then there are owner operated "heirloom" Maid Rites, most easily identified with a proper name in front of the name. These ones often have been run independently by the same family for decades, and often deviate from the regularity of fast food franchises. Some heirloom Maid Rites get tired of paying the franchise fee and just take down their sign and repaint in any color but red and white. The vast majority of all these places serve up a frozen tenderloin.

I knew that any Maid Rite location could serve a handmade tenderloin, but had never heard of one until reading an ad in Tidbits Newspaper where Westside Maid Rite advertised a half pound tenderloin, clarifying that it was the "biggest & best in town" and "hand made daily". I really can't tell if this location is run by the same folks who run the other one in Cedar Rapids, or the one in Marion. The Marion Maid Rite on the other side of town serves a "homemade giant iowa tenderloin" which they describe as "Best One Around!" along with homemade onion rings and pies.


Directions: First Avenue is the main drag through town if you are going east or west on Highway 151, or you can just find it by taking 1st street from downtown and looking for the small red striped shack. 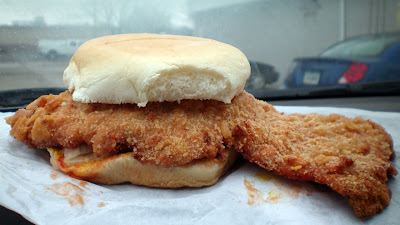 The Tenderloin: The first thing I noticed was a huge appendage of soft pork meat sticking out on one side. The whole sandwich is a big soft piece of pork with crunchy cracker-like breading that reached a good golden brown color. Its not thick, but is a little steamy inside. Served on a soft, very soft bun. Condiments were tucked under the meat and made a mound of onions and ketchup. This is an uncomplicated sandwich. Overall 7.4 out of ten. 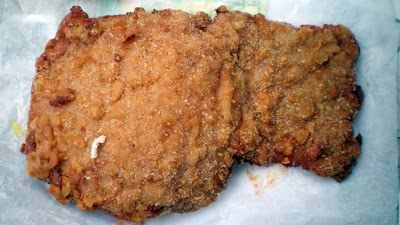 Also on the menu: There is the usual Maid Rite stuff, like Maid Rite sandwiches, chicken sandwich and bowls of chili. This location also serves goulash, roast pork, and has a waffle breakfast on Sundays.


Service: Counter service with food brought to your table. 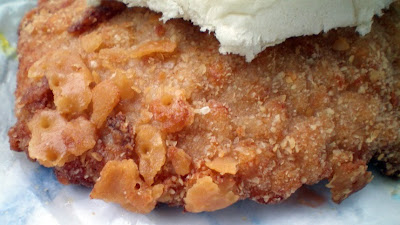 Ambiance: The dining area is small with booth seating and pictures of the flood and rebuilding effort.


Final Thoughts: Cedar Rapids is a proud town that takes its tenderloins seriously. I know I am not really doing this town justice by starting out here. The Westside Maid Rite is just one of several places which have reopened since the flood. I also made it to the Czech Village to try Al's Blue Toad, and I will try to make it to Little Bohemia when they get their deep fryer running again. 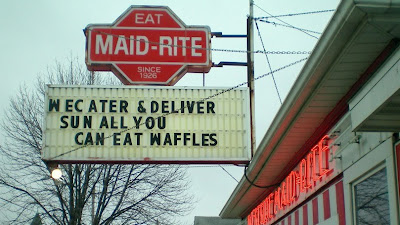 Posted by Tyrgyzistan at 3:07 AM