One Stop Sandwich Shop on the Square in Indianola 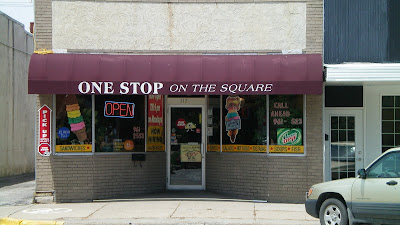 One Stop is a well known local Mexican food restaurant owned and operated by gringos for over 25 years. This place was once know as the One Stop Taco Shop, and had a building on Highway 69 on the north side of Indianola. Eight years ago It relocated to the north side of the town square, and changed to the One Stop Sandwich Shop. Menu claims local newspaper poll awarded this restaurant the "best tacos and onion rings in Warren County". Sadly, the building collapsed on Sunday morning.

Location: 112 W. Ashland in Indianola. About ten miles south of Des Moines.
Directions: Its in the middle of the block on the north side of the square. The square is a few blocks west of the highway that runs through town. 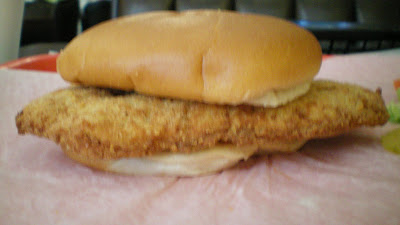 The Tenderloin: The old lady taking orders confirmed to me that the tenderloin was pounded with a hammer on site. What arrived on my tray was a less-greasy type of tenderloin. The inside was steamy and warm. The breading was dry and left few crumbs on the tray. There was an uneven thickness to the tenderloin itself. Served on warm but not toasted bun with all the fixings you desire. This was an okay tenderloin, but not the sort of thing to take me away from the excellent one served across the square at Crouse Cafe. 6.5/10
Price: $4.69 for jumbo size, also available in regular size for $3.49. 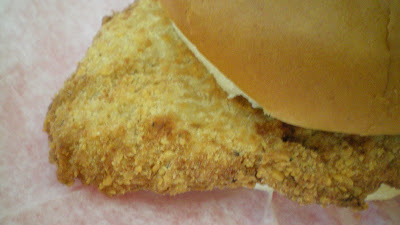 Also on the menu: Fresh made flour tacos are the house specialty. A huge menu of Mexican dishes, burgers, fried chicken and appetizers are also available. Ice cream is also served.
Service: Order at a counter, after looking at large menu on the wall. Wait for your number to be called, and pick up food from kitchen window. 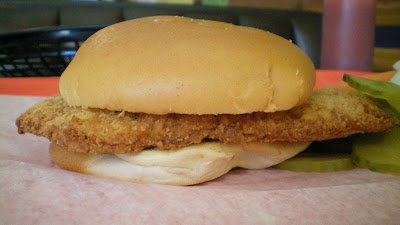 Ambiance: Nice natural light from large front windows in a high-ceiling dining room with booths and tables..
Final Thoughts: Am I cursed or something, just a month after I eat here the place just spontaneously collapses. This is just after Bibbs on 6th was flooded. Its an open secret that many of the town square buildings are falling apart, many were built quickly over a hundred years ago. The flat roofs must be maintained, if not then the snow alone will collapse the roof in any given winter. This place collapsed on Sunday after a crack was noticed in the plaster two days earlier. Jason Cross took photos of the aftermath: 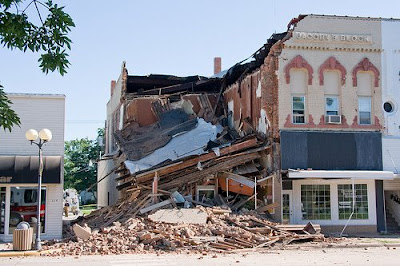 For Emergency Tenderloin Cravings: go south to the Crouse Cafe for one of the best in the state. Signatures Grill serves an okay homemade tenderloin as well.