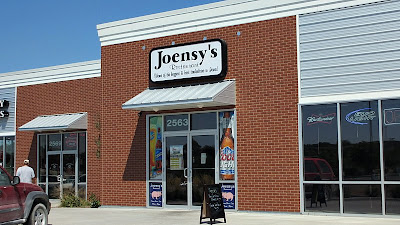 Is there any single tenderloin place more legendary than the original Joensy's in Solon? These people had been promoting their claim to the Biggest and Best Tenderloin in Iowa for as long as anyone can remember. The other locations have been thriving for years in Cedar Rapids and Center Point, operated by members of the Joens family. The old location was a true small town dive that I always had on my list of places to visit eventually. Its closure came as a surprise, I had only visited the Center Point location and hadn't made revisiting enough of a priority. The convenience of the Iowa City location made a visit incredibly easy while driving through Eastern Iowa.

Location: 2563 N. Dodge St in Iowa City in Eastern Iowa, its just 9 miles south on the road from the original location in Solon.

Directions: This is just a half a block off the Interstate at the Highway 1 North Dodge St. exit north of Iowa City. 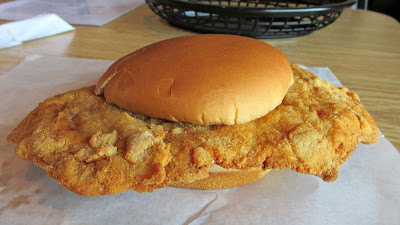 The Tenderloin: This is big but it felt like just over the usual eight ounces that most places pass off as a "jumbo" tenderloin. The very white meat is meticulously trimmed of all fat in my sandwich, while also a consistently tenderized and thin meat texture.. The interior would best be described as "steamy" but not juicy while very hot. I really couldn't taste anything in the breading, it was thick in parts where the dryness and crumbliness became a factor. Served on untoasted bun with basic fixings free. Overall 7.0 out of ten.

Price: The Large Tenderloin is listed at $9.50 but that is with fries and a choice of toppings. The plain giant tenderloin by itself was $7.00

Also on the menu: The Tenderloins are available grilled or breaded and with a giant choice of topping which don't look all that special. I understand the need to upsell and get more revenue per item but these topping just didn't look worth trying. There are also salads, steak and shrimp baskets, and other sandwiches. 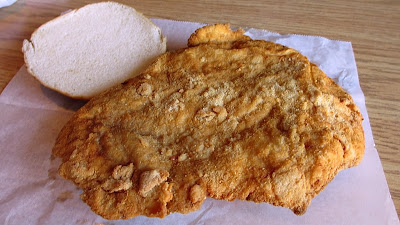 Service: I walked in at lunch time and there was some quick table service. The counter is an option for to-go orders. 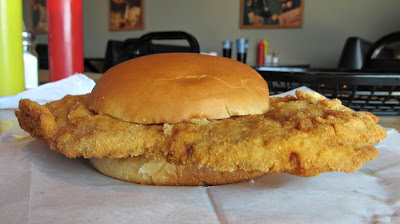 Ambiance: Strip mall ambiance with tables and booths for seating. The walls had mostly sports themed or beer graphics.

Final Thoughts: Joensy's goes way back, and its Solon location was a destination for Iowa City and Cedar Rapids people for years. The claim of Biggest and Best Tenderloins drew plenty of visitors but I don't know how many were regulars or just passers by. Its almost a sign of the times that a microbrewery could afford to buy out their old building, raze it to the ground, and construct a new one in its place. The attentive manager told a few patrons about Hawkeye football players stopping in recently, that might explain some things. 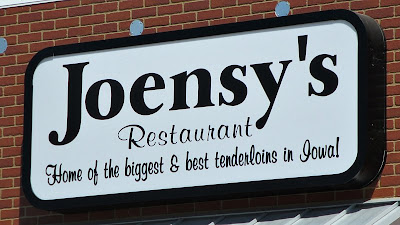 Posted by Tyrgyzistan at 3:00 AM