Vinny's BBQ in Dakota City has been on my radar since the IPPA named it the first runner-up in their 2012 Best Tenderloin in Iowa contest. The people behind Vinny's BBQ also built the "World's Largest Pork Burger" at the 2012 World Pork Expo in Des Moines. There is a video on youtube of the burger being unveiled from a large cooking pot.

Directions: Its right up the road from Rustix in Humboldt, which recently switched to being a reception hall instead of a restaurant.

Online at: Facebok page is HERE. 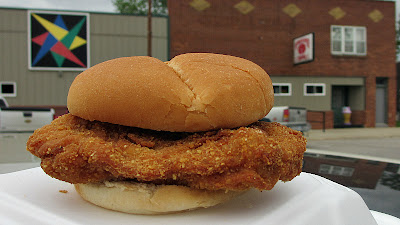 The Tenderloin: First things first this wasn't especially big or huge and the bun wasn't toasted well. So appearances were not impressive. What really sets this tenderloin apart isn't just the amount of juice, but the flavor in the juice. Any kind of seasoning or marinade must have been tuned to get this to taste "swiney", the unmistakable essence of pork flavor. I don't know how they do it, but the juice tastes more like pork than other tenderloins out there.Overall 8.0 out of ten. 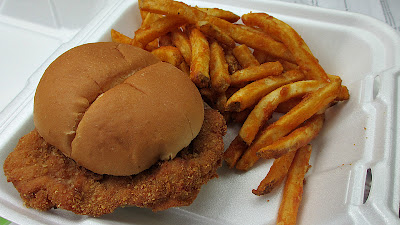 Also on the menu: The BBQ section includes smoked meats and ribs, and the sandwiches include a Pork Burger and Pork Chop sandwich.

Service: There is table or counter service, but I think you always pay at the counter. 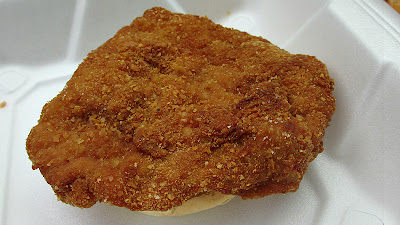 Ambiance: This is a Main St. brick building, and it looks like the original counter and booth area has been expanded to include two more table seating areas. The walls are covered with John Deere tractor stuff, kids drawings, and BBQ competition awards.

Final Thoughts: This is a great option for people traveling through now that Rustix has switched to a reception venue.I may have to stop back for the other pork options, because it seems clear these people are passionate about pork.

Posted by Tyrgyzistan at 3:10 AM