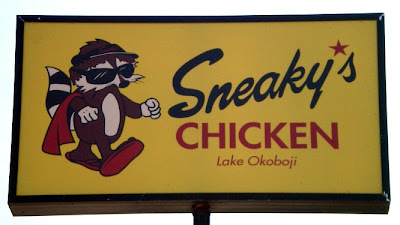 
Directions: Highway 71 is the main drag into Okobji, and Sneaky's is just south of the bridge across the lake. 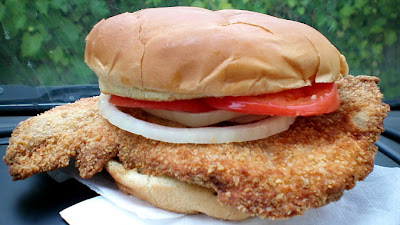 Sneaky's Pride: This sandwich is described as "famous" and "hand breaded" in its description. It felt like seven ounces of pork meat in the classic mitten triangle shape. The meat was cut with the grain and a little on the thin side. The texture was a great hard crunch on the outside with chewy and dry pork inside. I can't help but think this is the same kind of breading they put on their fried chicken. Served on a huge toasted bun. Overall 7.0 out of ten. 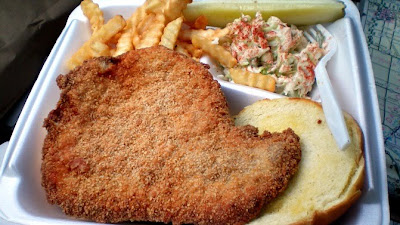 They took a usual cole slaw mix and topped it with what must have been paprika for some extra color: 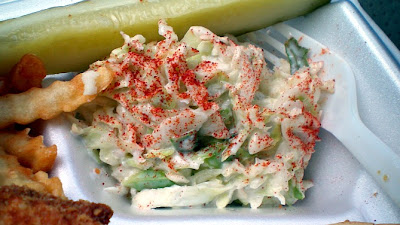 Service: I came in during the off hours and went straight to the take-out counter. I think its table service for dining in or on the patio.


Ambiance: This is a newly remodeled space that was just recently turned into Sneaky's. I don't know what was here before, but the dining area was open and bright, and you might be able to see the lake from the corner of your eye from the patio. I snuck out of this place without getting a picture of the building. 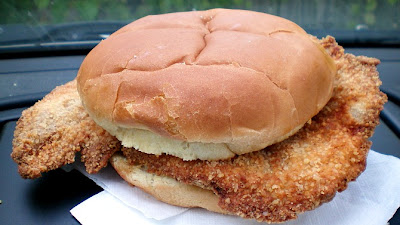 Final Thoughts: The Sneaky's Chicken location in Sioux City is in more of an older roadside fast food style of building several decades old. I saw the menu board there and it only listed Sneaky's Pride, and I didn't put together that that was the name for their tenderloin. I haven't written up many sandwiches in this part of Iowa because I don't make it that often. Sneaky's was only my second choice after another place was closed. I'm sure this place gets busy during the summer months when the lake is packed with families.
Posted by Tyrgyzistan at 1:46 AM