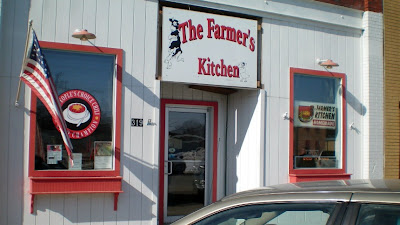 The Farmer's Kitchen is known far and wide for comfort food in Western Iowa. The chef here, Mark, is a perfectionist making all dishes from scratch and tinkering with recipes to win local and national acclaim. Since it opened in 2002, the wall of awards has grown to take up an entire corner of the restaurant. The pies have been noted by Jane and Michael Stern from Gourmet Magazine and Roadfood. The local paper tells me Mark has been entering competitive chili contests for over twenty years. Finally, the Cy-Hawk Burger has been nominated by the Iowa Cattlemen as one of the best in the state just last year. In 2005, the IPPA named The Farmer's Kitchen as an Honorable Mention in its annual Breaded Pork Tenderloin contest.


Location: 319 Walnut St in Atlantic, Cass County, in Western Iowa. About seventy miles west of Des Moines, Atlantic is close enough to the Interstate for travelers to reach it without taking too much time off of their trip.


Directions: Going south from I-80 Exit 57 turns into County Road N16 which turns into Olive St in Atlantic, turn West of 3rd St to reach the restaurant. 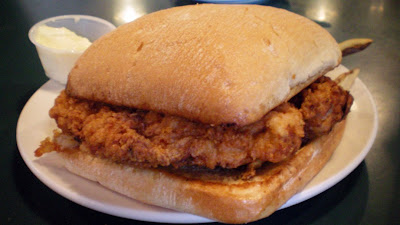 The Tenderloin: This is listed as Nate's Pork Loin Sandwich. I had to make a new visit when I found out the tenderloin recipe was changed by marinating the pork loins. This adds a significant amount of juice. The breading is batter-like in character and has some light seasonings forming a fine layer that tears apart revealing the bright white meat underneath. The meat is cut thick and tenderized three times, resulting in a unique texture pattern. Served with all the fixins on a toasted Ciabatta bun. The bun is fresh and nicely toasted, but it is large compared to the meat portion. If you get the lettuce, tomato and onions they serve it with a knife stuck through the top. Overall 8.9 out of ten. 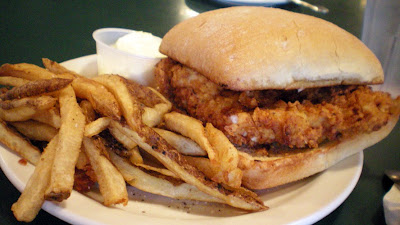 This is a photo of the Onion Rings with their special sauce I took a while ago: 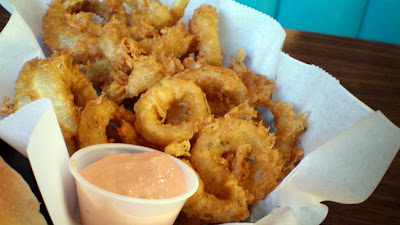 There were at least 14 types of pie to choose from during my last visit, I chose one with a Blue Ribbon next to it from a contest award from 2009. The Peanut Butter Chocolate Explosion has two layers of pudding with chocolate syrup and peanuts: 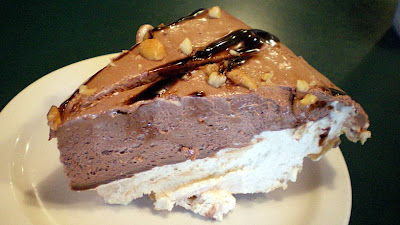 Service: Its seat yourself with tables in two dining areas, waitresses are the attentive small town type and food takes time.


Ambiance: Its farm themed decorations with tables for seating that can be moved for large groups. The high ceilings with hanging lights that make photos difficult. 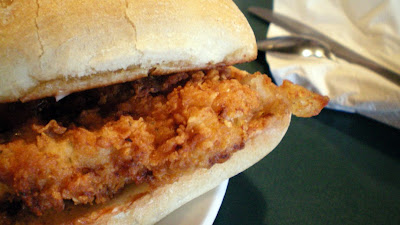 Final Thoughts: Its no mistake that the Farmers Kitchen pack in the crowds in the small town of Atlantic. It has become a gathering place for the locals of this town and the area around it.This place has been on my radar since 2005, and I've been impressed with each visit. I may have even volunteered to drive to Red Oak and back just so I could eat at Farmer's Kitchen for lunch at one time. This place lives up to its mission statement printed on the menu which claims "we do not serve fast food..." and "We do NOT serve homestyle food. We serve HOMEMADE food". 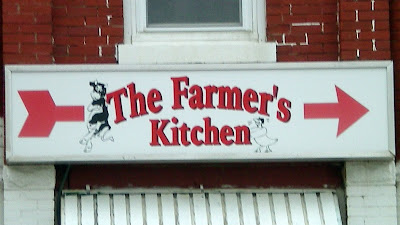 Posted by Tyrgyzistan at 3:49 AM