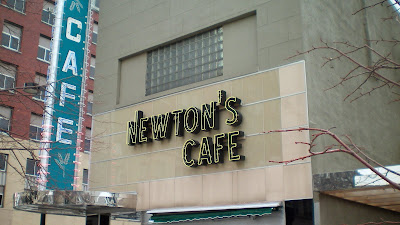 For many years this building was known as Newton's Jewelers on a busy corner in downtown Waterloo. The rehab of this aging building looks like miracle work. A local grant of $50,000 made the exterior renovations possible. This included restoring the original exterior Carrara Glass to its Art Deco glamour from decades ago. Just this year it reopened as a cafe with the jewelery store signage of GOLD SILVER WATCHES DIAMONDS changed to read Great Fresh Local Food. The relatively young chef placed in charge has created a menu of simple comfort foods made with fresh and local ingredients whenever possible. Some of the online reviews claim he has become a local hero, using Farmers Market produce and protein from local farms will do that in a town like Waterloo.


Directions: You should look for the revolving sign reading Newtons Paradise Cafe at 4th St and Sycamore when driving around the north side of downtown Waterloo. 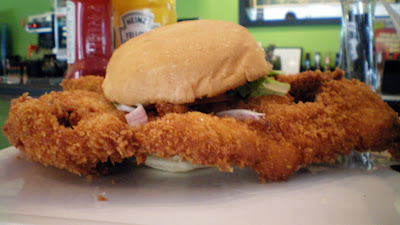 The Tenderloin: This is at the bottom of the menu, listed as Iowa's Pork Tenderloin. The first thing you notice is the giant size, it envelopes the square plate and dwarfs its bun. The edges of the pork loin form arms and branches that fold and curl like a fried pork octopus. the breading includes some giant bread crumbs that pack a giant crunch while producing hundred of crumbs scattering everywhere nearby. The pork inside was bright white and mostly trimmed, with only one tiny bit of fat. Served on a toasted Ciabatta bun with Romaine lettuce, sliced onions and tomato. Overall 9.0 out of ten. 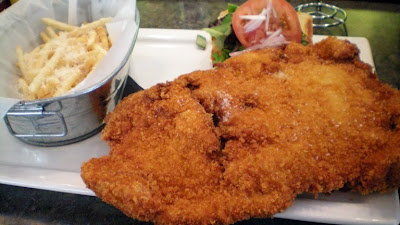 A special note about the size: This thing felt like it must have been twelve ounces of pork loin before breading and frying. If I had eaten earlier that day, I would not have been able to finish this thing. The giant size may scare some people off, as only one other person there was eating the tenderloin, and they were cutting it in half to share or take home. The tenderloin looked about four times bigger than anything else served here.


Also on the menu: A small menu with sandwiches like a Rueben, Roast Beef Dip, or salads and wraps. They serve a full breakfast all day.


The French Fries: these were only fifty cents extra, but the Parmesean and Oregano didn't stick to the fries, and jest fell to the bottom of the bowl. The fountain drinks were $2.00. 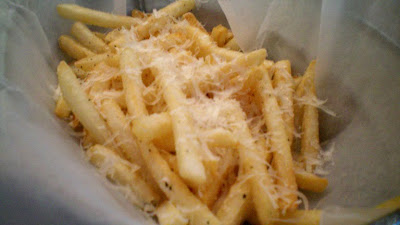 Service: Its table service with waiters running around all the time.


Ambiance: They put a serious amount of money and designing time on the interior. There is a green color theme with paintings of farms and ornaments of roosters on the walls. the ceiling has a painted blue sky with clouds against a stain glass sun window. There are tables and booths for seating, and a small bar. 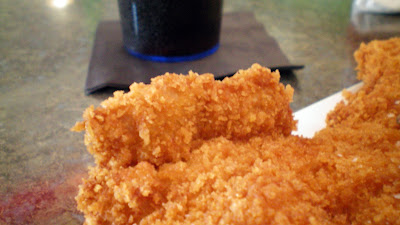 Final Thoughts: Its not uncommon for a restaurant with such a heavy investment to cut corners on the menu. Thankfully, Newton's Paradise Cafe has at least one great menu item. I would not be surprised if the chef had tried the tenderloin at the Augusta in Oxford while developing this one. A nearby sports bar claims to serve the "largest pork loin in the Cedar Valley" on its menu, but I doubt its as big as what they serve here at Newton's. 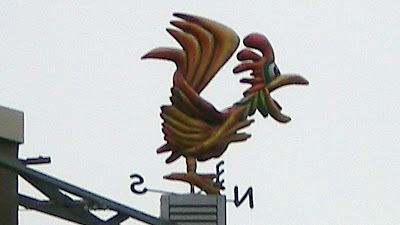 Posted by Tyrgyzistan at 3:22 PM