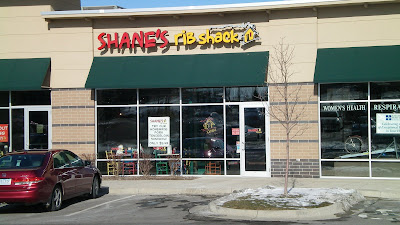 Shane's Rib Shack is a chain of BBQ restaurants founded in Georgia, each has a photo of their smiling fat guy founder, Shane, posted inside. I was quite surprised to see their window advertising homemade tenderloins while driving through Clive, so I decided to stop in and give it a try.
Location: 12695 University Ave. in Clive, Iowa.
Directions: Take University Ave in West Des Moines to the intersection with Granite City and Biaggi's, look for this place in the strip mall behind Walgreen's.
Online at: http://www.shanesofiowa.com/ 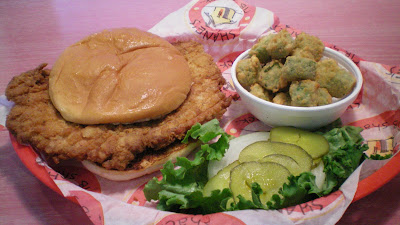 The Tenderloin: This was something new. The bright white cut of pork was not tenderized at all, just cut across the grain. It was tough to bite into at first, but fell apart with chewing. The thin cut of pork was floppy when lifted off the food basket, with the meat was thinnest at the center. Breading was lightly seasoned southern-fried chicken tasting crunchiness. The selection of BBQ sauces to top the sandwich were a plus. Served on a toasted bun with all the fixings 6.7 out of ten.
Price: $5.49 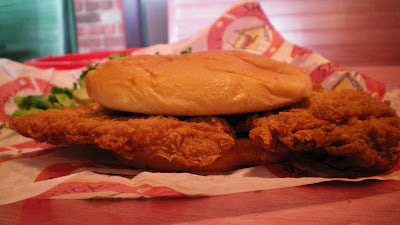 Also on the menu: Southern style BBQ favorites like Chopped Pork, Beef Brisket, and Ribs, sides including a thick stew and fried okra. 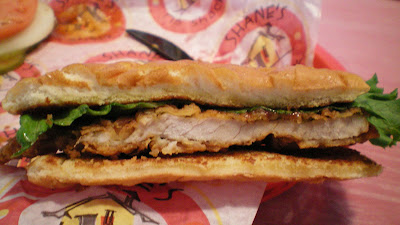 Ambiance: Over-done decorations for someplace in the suburbs. Tables and booths to sit and watch sports on TV. A bright multi-colored interior with BBQ shack decorations.
Final Thoughts: I am encouraged by this menu addition by the local franchise of a Southern BBQ chain. In order to make the tenderloin better, they need to tenderize it first. Its a good option in the tenderloin desert that exists in the suburbs of any big city in Iowa. 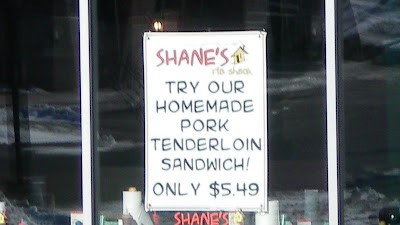 Posted by Tyrgyzistan at 4:25 AM