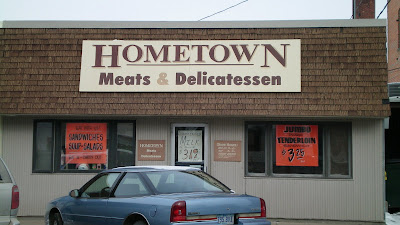 A trip through the midget car racing capital of the world took me past Hometown Meats and Deli. Its blaring window sign meant I could not miss this tenderloin.
Location: 111 E. Robinson, Knoxville. about 40 minutes southwest of Des Moines.
Directions: Its just half a block off the square from the southwest. 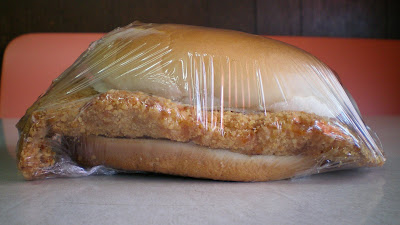 The Tenderloin: I understood that this was under a heat-lamp after the person behind the counter only took about 15 seconds to put it together and ask what I wanted on it. The breading was crunchy partly from hardening under the lamp, and tasted the same as a zillion other average tenderloins. There was a thin chewy layer of pork loin with good pork flavor. The tenderloin only went slightly beyond the bun. The regular fixings are available if you ask for them. The bun is just pulled out of a bag. I think it may be wiser, maybe even cheaper, to buy these uncooked and fry them at home. 5.5/10 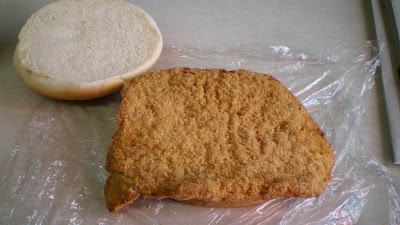 Price:$3.25, Friday special for $2.70
Also on the menu: Deli style sandwiches, beefburgers, tacos, and other fried stuff. There is a full meat selection as well. 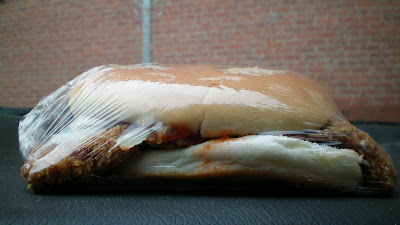 Service: A handful of people shuffle around behind the meat counter. You have to tell them what you want on top of your sandwich, there is no fixings bar. 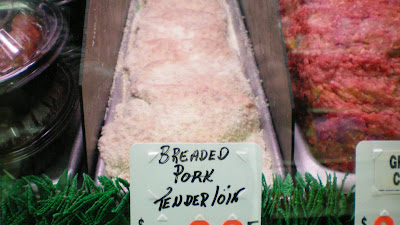 Ambiance: There is the meat counter area and a separate dining area in front. There were stacks of inventory boxes holding soda cans inside right in the middle of this area when I was here. Many locals were in and out, nearly all were getting the tenderloin. 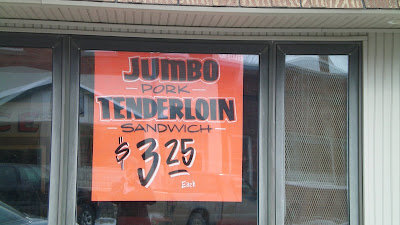 Final Thoughts: This was just an okay second choice after I found that the Main St. Cafe had changed ownership and no longer served a tenderloin. The big sign on the window made it easy to find. This isn't the best heat-lamp style tenderloin, nor is it the best butcher shop variety.

Posted by Tyrgyzistan at 9:49 AM