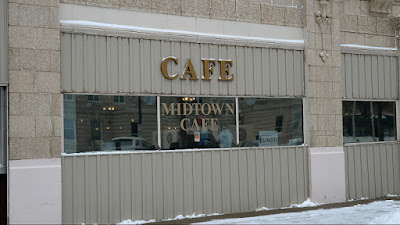 A lot of places have come and gone over the years in Newton but this little place with the words CAFE visible on the square has been around for as long as I can recall. This is an older diner that specializes in burgers and breakfasts that had a bunch of families eating here when I visited.

Directions: this is on the East side of the square across the street from the County Courthouse. 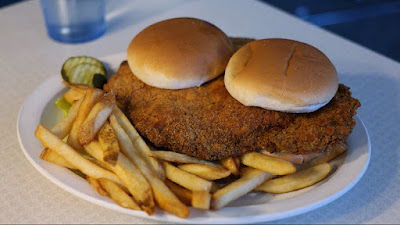 The Tenderloin: The description simply states that this sandwich is big enough for two. This came with two buns and a side along with the fixings. The first thing is that this is big and well bigger than the usual eight ounces that most places describe as "jumbo". The problem was that this seemed to lack moisture inside and the edges were especially dry. The middle had some good white pork loin meat that was soft enough to chew through easily. The breading was crunchy but not tasty and the whole thing felt like too much time in the freezer had sucked the moisture out. Overall 7.0 out of ten. 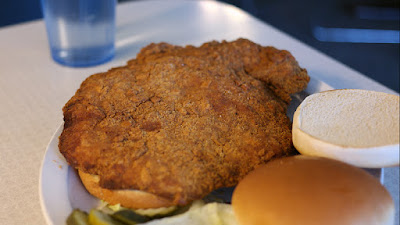 Also on the menu: Diner food classics like burgers or sandwiches. There is a full breakfast selection with an dish named The Annihilator, and more than one food challenge.

Service: its seat yourself table service with tables and booths and a counter in the back. 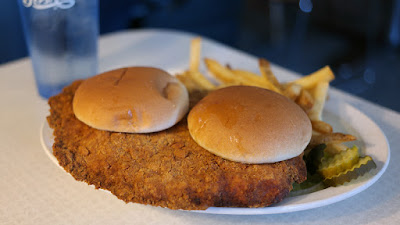 Ambiance: This is an old space with old fixtures and furniture in an old building known as The Midtown Building.

Final Thoughts: I had driven through Newton so many times over the years that I couldn't count. but finding a good tenderloin has eluded me. I had tried an old diner beside the Maid Rite, and I wanted to stop at a racing themed bar on the East side of town. But that place was closed on a Sunday when I was driving through, like how many racing themed bars are closed on Sunday? I remember when there was an Argentine steakhouse called Gauchos just a block of the square and I never made it in and now its been gone for ten years now. 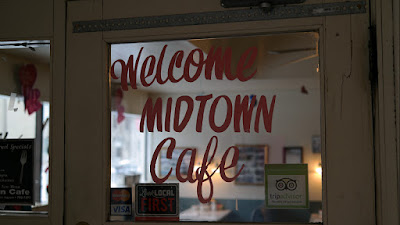 Posted by Tyrgyzistan at 4:45 AM