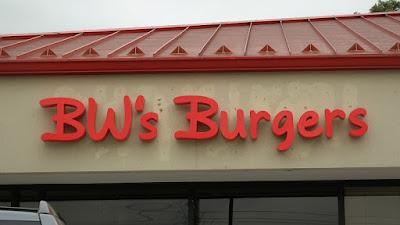 A few months ago the facebook page of The Rusty Duck in Dexter announced they would open a bar and restaurant in West Des Moines named BW's Burgers Shakes & Spirits. The Rusty Duck in Dexter had once won an award from the Iowa Cattlemen for having the best burger in Iowa, and had a runner-up award from the annual IPPA tenderloin contest. I would guess that BW is the initials of the owner of the two places.

Directions: This is in a strip mall with three other restaurants that haven't been here very long, you can get to EP True by taking Grand Ave. from Des Moines. 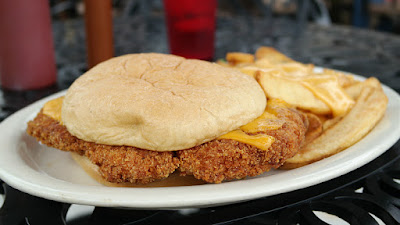 The Tenderloin: This one had a wide oval shape with a butterfly cut in the middle. I had been here before and had a different shape. Each loin I've had here has been very thick and juicy. I've heard pounding noises from the kitchen, but the texture of the meat feels undisturbed by tenderizing. The meat inside is a bright white loin meat, and the breading is a thin crunchy layer with a hint of pepper. Served on a large and soft toasted bun with your fixins. Overall 8.2 out of ten. 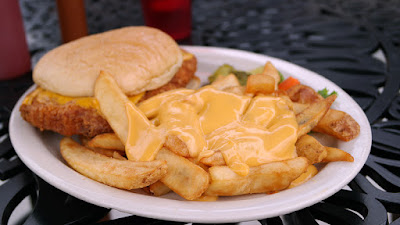 Also on the menu: The menu isn't big but has steak sandwiches and burgers and other bar foods with some specials listed on the menu board

The Ultimate Cheeseburger: I would guess this is similar to the burger that was awarded by the Iowa Cattlemen or Beef Association at the Rusty Duck. This is topped with peppers and onions and melted cheese cooked to your preference, I go with medium well. Served with fries for about twelve dollars.

I was in again and they had a Nachos Special on the menu board, and it was a pile of tortilla chips with Italian Sausage and melted cheese and raw jalepeno peppers. This wasn't a regular menu item and it felt like an appetizer for a group of four or more.

Service: There is a take-out counter and table service. 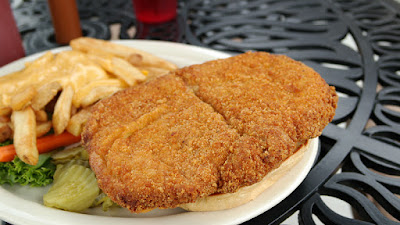 Ambiance: This space has had a couple restaurant tenants, the last one being a place trying to sell loosemeat burgers and hot dogs. The dining area has tables, and the patio area is open for the season.

Final Thoughts: I had been to Dexter a few times over the years, but the Rusty Duck is only open evenings and I never made it inside. If the burgers here are the same as the ones these guys serve in Dexter, then I would be interested in coming back to try one someday. 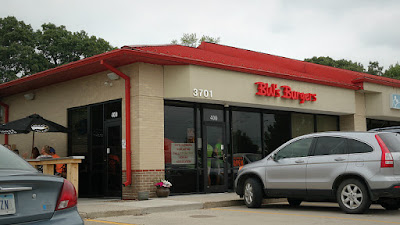 Posted by Tyrgyzistan at 1:26 AM